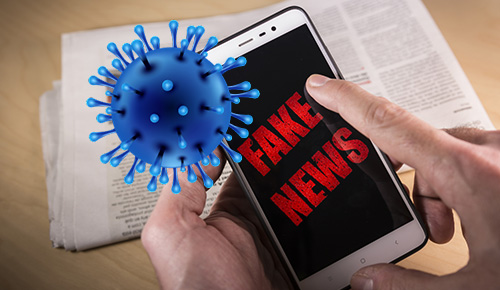 But there is a threat that can only be defeated through one weapon: yourself and your awareness.

We are talking about fake news: invented, deceptive or distorted information made to obtain illicit advantages.

The only remedy not to fall into these trivial scams, and not to be influenced by bogus information, is to deeply inquire and research, on different sources, especially institutional ones.

Awareness of what is happening around us, and the knowledge of the threat itself, are in fact the only remedies to avoid the information fraudsters.

Let’s find out what are the most common fake news today, regarding a very popular and discussed topic at this time:  Corona Virus.

Fake news about the virus’ origins

Let’s start from the basics: since this health crisis began, there have been many questions about the origins of the virus.

It has been clarified that the epicenter of the contagion was the city of Wuhan, in the market area, where there is a large sale of live wild animals and hygiene conditions are scarce. We know for sure it is therefore a virus born and transmitted by animals to people.

On the web, however, there were many hypotheses about the birth of the Covid-19:  for example, the story of an American scientist, professor Charles Lieber, who would sell the Coronavirus to China. This scientist really exists, has a professorship at Harvard in chemistry and biological chemistry and was truly arrested for denying his relations with China, particularly with the Wuhan Technology University.

The fake news in question, therefore, starts from real characters and events, and then turns the real information into a hoax: among the charges in fact there has never been that of virus trafficking, because the virus, as we have said, provenly comes from the animal world and not from any laboratory.

Let’s name another imaginative fake news that doesn’t really originate from true characters: the one that blames the birth of the virus on aliens, who seem to be using The Coronavirus to conquer the planet.

Also, have you heard about the fake news stating that the virus would have been invented by France and the United States, collaborating to bring the Chinese giant to its knees and, at the same time, punish Italy, and in particular the political leader Luigi Di Maio, for signing the economic pact on the new Silk Road with China? That’s a twisted one for sure.

How do Social Media cope?

The main social media platforms are trying to contain the spread of fake news now more than ever, to avoid further panic.

So let’s see how the different platforms are responding:

Some of the conspiracy theories revolving around the corona universe have such engaging plots…sometimes they’re even able to confuse even the most informed readers.

Some stories say the pandemic is actually a game of interest behind which there would be the so-called Agenda ID2020 protocol, which involves the spread of a vaccine containing a microchip to inject to the entire population to control it through 5G, the new standard for mobile communication.

Other stories claim that the virus serves to balance overpopulation on Earth, others that it was a  machination of Bill Gates, financially supported by the master of the WHO being the largest private donor, and others that it is a secret bacteriological weapon that China has lost control of.

There was also racially motivated fake news, which claimed that non-EU nationals were immune  to the Covid thanks to the tuberculosis vaccine…and fake news about controversial political figures, such as the supposed release of lions in the streets of Moscow by the Russian leader Putin to force people to stay home.

Russia is also the subject of another very famous fake news, telling that there was already a med in the country able to cure Covid, and this would be the reason why the data in the Russian Federation are very far from the European ones in terms of contagion.

Even the most vulnerable, such as the elderly, were sent a fake letter report with a 50% reduction in pensions due to the emergency…and also our furry friends weren’t spared, with an increase in cases of pets abandonment following fake news reporting that our pets could be virus carriers.

The big dilemma behind the prevention of Coronavirus-themed fake news is the absence of scientific certainties, as some issues are still being tested and defined in the scientific community.

The advice that we can therefore give, in addition to the aforementioned fact-checking system, is to refer only to institutional, national and international sites, such as the National Institute of Health, the Ministry of Health and the World Health Organization:

How to curb fake news in the days of smart-working

Smart-working is increasingly connecting private and working life, and in this context, fake news can turn into a deadly weapon for cybercrime. Only the human factor is able to make a real difference.

Every organization should therefore invest precisely on human factor, to increase the awareness of non-specialist staff on the different types of cyber threats, through e-learning training paths with constant and gradual release.

Because cybercrime threats can only be drastically eradicated through behavior-changing cyber security awareness training activities.

This is an necessary category.

This is an non-necessary category.